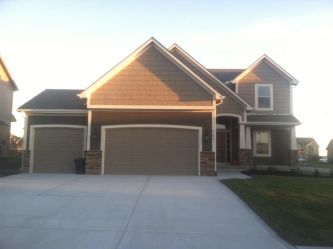 A meeting in April.

Digging dirt in May.

With Jon and Tara McDonald, Homes by Chris’s Feature Family, the building process was silky smooth.  They had heard horror stories, yet they were prepared to take on the challenge of building a home.  After seeing the model home in Hills of Montclair, The McDonalds knew HBC would be their chosen custom builder, and they couldn’t be happier with how it all turned out.

The whole process began with a phone call and a meeting.  Within a few weeks, the McDonalds had the ball rolling to build their home.  Roy and Chris Ragland met with the family and walked through the available lots in Benson Place Fieldstone.  The McDonalds knew they wanted a large, flat lot that was not a walkout.  Jon noted that Chris and Roy were very up-front about the possibility of hitting rock as they excavated their lot, and he said he really appreciated knowing that it could happen so there wouldn’t be any surprises.  As they all worked together, they found one which was perfect for the home they wanted to build…..and didn’t end up hitting any rock!

As for the home, the McDonalds fell in love with the Ruby plan, a two-story home which has a spacious master suite and bathroom, as well as an oversized closet and laundry room.  Having that extra space in those rooms has allowed the family to run their household efficiently.  Another important part of the home was that Jon and Tara wanted to have a patio so the kids would be able to run out the door to play in the yard instead of having to travel down deck stairs.  They added their own touches, such as built-in benches by the television and mantel, extra windows in the dining room, as well as an extended patio and a fire pit.  Tara commented on the fact that Chris is a perfectionist and wanted every aspect of the home to be impeccable.  Every change the McDonalds wanted, they got.  All in all, it was a walk in the park.

For those who have built houses, you know how personal the whole experience is.  Working with Homes by Chris, the McDonalds appreciated the one-on-one interactions they had with Roy, Chris, and Julia Haseltine (interior designer).  Not every custom builder is as hands-on as the Raglands, and the McDonalds realize that.  Jon said, “We would definitely build with HBC again; they were so far above our expectations.”  And the Raglands have a little piece of the McDonalds still with them, naming two of their latest floor plans after the McDonalds’ children:  Parker and Hadleigh.  This is just another example of the relationship you build all while building a house…..while building your home. 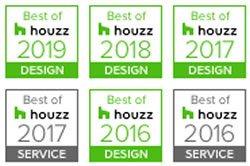